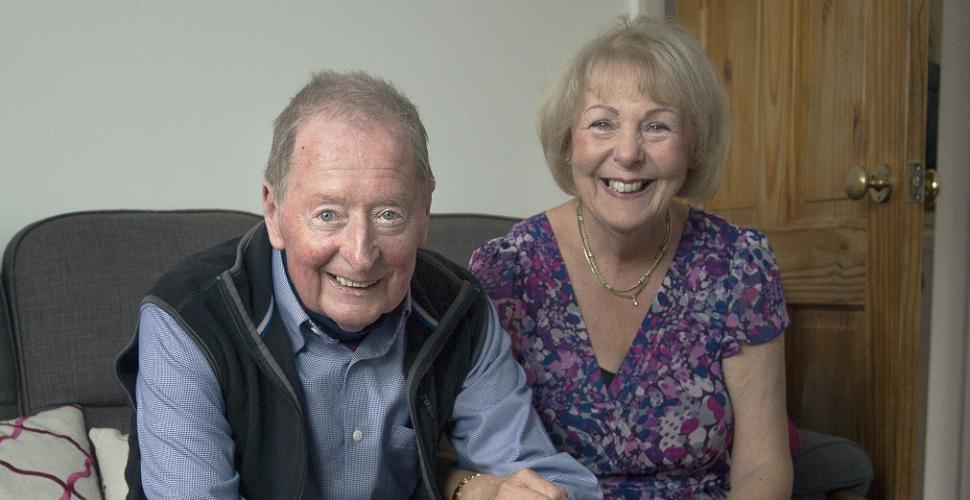 Susan and Bruce live in West London. Susan worked for many years for Ealing Council and is now on the board of Trustees at Dementia Concern. In 2001, Susan’s husband Bruce had a stroke. Two years later he was diagnosed with Parkinson’s disease. In 2011, he was diagnosed with dementia with Lewy bodies and told he’d have six years to live.

Susan’s story shows the significant strains placed on carers, how devastating it can be when statutory services fail to provide adequate respite care and how the impact of reductions in spending have made it difficult to access and retain good care in the home.

Bruce’s dementia diagnosis was ‘devastating’ for Susan and Bruce. Initially, they were put in contact with a few local charities that run activities for people living with dementia and their families. For a number of years, contact with the voluntary sector meant Susan didn’t seek support from statutory services. But when her mother died and Susan needed to go away to deal with the estate, Susan and Bruce had to seek support from the council.

While Susan travelled to the coast to sell her mother’s home, the local authority found a place in a local care home and Bruce was admitted for a week. Susan was relieved as she felt reassured that Bruce would be safe while she was away. But the reality of his stay made her determined to keep him at home at all costs. “My friend and her husband went with me to pick him up, and he was unrecognisable. He hadn’t been shaved, he couldn’t walk, and his eyes were crusted, because he suffers with blepharitis. All his clothes were missing, it was awful, absolutely awful, and I couldn’t believe it. I cried, cried, for weeks afterwards. He’d been abused really, neglected. I vowed that I’d never put him in again.” Susan took the matter up with the CQC and the local authority. After some time, the matter was dealt with. Bruce was then assessed as eligible for a home-based package, but unfortunately the experience of home care was also poor. “They didn’t know what they were doing. It seemed like they’d never cared before. They turned up at five o’clock in the afternoon to put my husband to bed. Or they turned up at ten once I’d already helped him to bed. Absolutely awful. I hated them.”

After a great deal of chasing, Susan eventually managed to get the council to agree to use an agency recommended by other carers whom she had met through the local voluntary sector. The new agency made all the difference. “They came in and they were brilliant. The assessor did an assessment of Bruce. Very professional. I fought to get them. We’ve gone from strength to strength since then.” Susan’s fight to get the best home care was aided by the efforts of one particular social worker who advocated for her and Bruce. Her positive attitude helped Susan to trust her, and she has been helpful when Susan needed advice. The social worker acted as her single point of contact and went, in Susan’s words, ‘beyond the call of duty’

Set back in hospital — discharge

Unfortunately when Bruce’s care needs escalated following an admission to hospital for problems with a trapped nerve in his spine, there were problems arranging a new package, and Bruce’s discharge was delayed. A lack of communication between the local authority, the existing agency and new agencies who could deliver the double-handed (two care workers) visits Bruce now needed meant he was stuck in hospital beyond the point at which his medical issues had been stabilised. Susan explained: “Nobody was speaking to anyone else, social workers weren’t speaking to the care agency, and neither of them were speaking to me. They blamed each other.” At Susan’s request, an occupational therapist reassessed Bruce and said he could probably cope with a single care worker visiting him, so he was able to be discharged into the care of the existing care agency. However in reality Bruce’s support continues to require two pairs of hands, and Susan has had to step in to provide the care for which Bruce was initially deemed eligible. She feels that if she had not done so he would have remained stuck in hospital. “The first day he came home I had to help out because he really did need two people. But if I didn’t do that, I’d have never got him out of there.”

At this point Susan really needed support to enable her to keep caring for Bruce. She said: “I was losing my hair, I had to go to the hospital. I was just binge eating, put on too much weight.” She put this down to the stresses of caring for Bruce. She was pleased to find out that the council would soon offer a more comprehensive assessment for carers, under the Care Act 2014. Although she had to wait from April when the changes were implemented until November 2015 to get her assessment, she was eventually awarded seven hours a week respite as a carer. She has been able to get away from the home more and go on holiday with her son. This support has been invaluable to Susan. She speaks highly of a number of the professionals she’s been in touch with at the council and in the voluntary sector. But she is also very critical of the imbalance of power carers face when confronted with complicated systems of eligibility and assessment. For Susan, the worst part of dealing with the council is being made to ‘feel small’ when confronted with the complex and fragmented care system. “You go in there, and you’ve got no idea about anything, about care. It’s like going in on the first day at school. You try to find out as much beforehand on the internet, but, some of these people are horrible, you know, they really just don’t care.”

Susan thinks part of the reason some people at the local authority don’t seem to care is because they are stretched by budget reductions. “The staff are so cut, they’re just running round ragged.” Susan’s story reflects the determination of those who work to get the best deal for their loved ones. She has been failed by the care system, but the diligence and care of some professionals has ultimately made all the difference for her. While the Care Act 2014 has had an impact on her life, she had to wait too long for it to take effect, and every improvement has come at a cost for Susan’s own wellbeing.