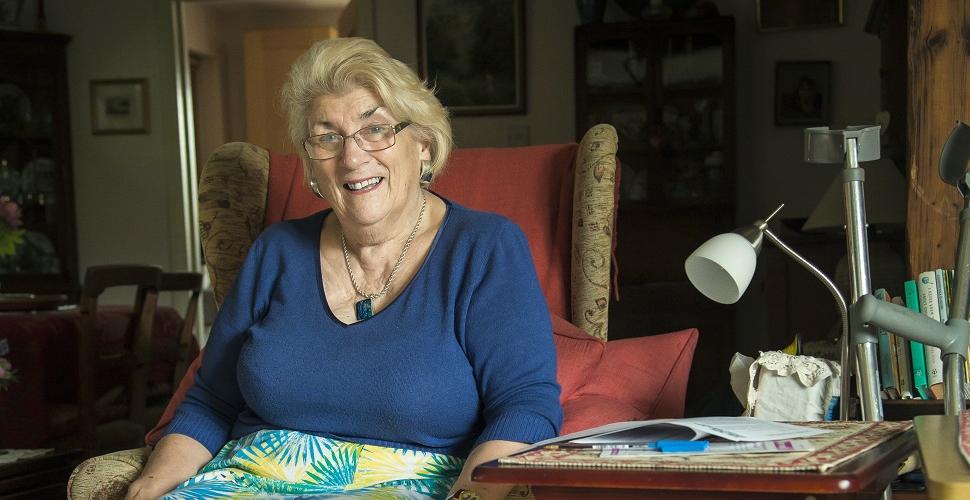 Ann and Cyril live together in Oxfordshire. They have been married for 54 years. Ann provides care for Cyril who is living with dementia. They live next door to their daughter and her family. They have close ties to their community and to their church. Ann is a former district councillor who cares for her mother and previously cared for her aunt as well. Despite being offered a package of support from the local authority, Ann and Cyril have been frustrated by the lack of flexibility in the care system. They have found it difficult to make the social care system complement the support that is already available to them from friends and family.

After Ann and Cyril retired, Cyril began having memory problems and was eventually given a dementia diagnosis through a local memory clinic. The diagnosis was a start, but Ann felt there was little follow-up support, and instead they had to make arrangements via their GP. Following diagnosis Cyril was assessed by the local authority social care department, which found he was eligible for a personal budget of £79 per week. Ann and Cyril talked about how best to find support. They considered taking a direct payment, but ultimately decided that employing their own support staff seemed like too much of an administrative burden:

“They didn’t explain I would have to employ people, pay a stamp for them and start a pension for them. That all came out afterwards, and I said, ‘I can’t do that. I’m just not physically fit enough and I don’t want to do it’.”

Only five weeks later she was told that she would have to pay back all but £2.50 of the payment allocated anyway.

Ann felt that the assessment of Cyril’s needs did not take account of the support he already had, but instead just looked at his problems. She spoke of how she’d have liked to use the money to which Cyril was entitled to provide informal recognition of the support of friends and neighbours, perhaps through giving small gifts, rather than by making formal employment arrangements, which would only add further stress to the family situation.

“The other lady would come in, she’d have a coffee with Cyril, then she’d either stay or have a sandwich with him here, or she’d take him out somewhere. But she’s a friend, we take her to church, he doesn’t look on her as a carer.”

They wanted to do the same with their grandson who was already providing significant support to them both.

“My grandson will sleep overnight. He’s 19, he doesn’t want paying, but I want to show appreciation for his time. He’s given up going out with his friends.”

The relationships that make up Cyril’s care aren’t traditional roles of ‘carer’ and ‘cared for’. They are family relationships and friendships. But Ann found the council unwilling to support her in a way which would help her in maintaining these relationships.

“We are lucky, we own our own property. We have a lovely daughter next door…she’s a teacher, she then feeds my husband. When he falls over, we can rely on one of the boys to help out. They love him dearly and they are fantastic with him. We are so lucky. But they can’t always be there.”

As a result Ann and Cyril have not taken up the package offered to them and instead Ann and her family have relied on arranging and paying for care themselves. Ann says she doesn’t mind contributing, but if the local council were more flexible, her situation could be a lot more stable and secure.

A particular worry for Ann is what will happen if her health gets worse, and a recent admission to hospital for an operation has compounded her fears about this situation.

When Ann was admitted to hospital for an ankle injury she needed to arrange care for Cyril until she could be discharged. But she found the council were inflexible in their offer.

“When I was in hospital, I wrote to the local authority and said, ‘look, can I have £300 to give to the lady who’s coming in during the day to look after Cyril, and can I have £100 for my grandson?’ They said ‘no’; I said, ‘okay then, you send somebody in. It’ll cost you £165 a night, for someone to sit in my sitting room and do nothing.’ They moan about lack of money but I mean…it’d be making the most of the support we have, making sure they can keep helping us.”

Ann managed to make arrangements, but then found her own discharge was delayed because no care was available to support her to get home, instead the hospital suggested she should go into a care home – but this would have left Cyril without support. Ann was frustrated and feels that the recent reductions in social care spending really have had an impact on her, and her husband’s, care.

“I didn’t want to be in the hospital, I wanted to be home, but they said I couldn’t. I thought I was entitled to care, but they said there was a shortage. You just feel like a package. They’ve done the operation, they now want to get you out. I felt like there was no point in doing the operation if you can’t get the aftercare right.”

Eventually Ann was discharged and, with the help of her family, was able to resume some of her caring responsibilities. However she remains on crutches and is coping with just a little bit of help from a cleaner. The whole process has taken its toll.

But Ann is determined to make her situation work. She and her family want to continue to live their lives on their own terms.

Ann is supported by a strong family caring for one another. However, the arrangements can feel precarious. More flexible support from the local authority could potentially shore up this arrangement for the longer term, by helping Ann to continue in her caring role and securing the other elements of Cyril’s ‘natural’ support in the wider family and community. In policy terms this would be called asset-based care planning. Ann would just call it common sense.